Engineering Value Podcast-Looking Back, Forging Ahead 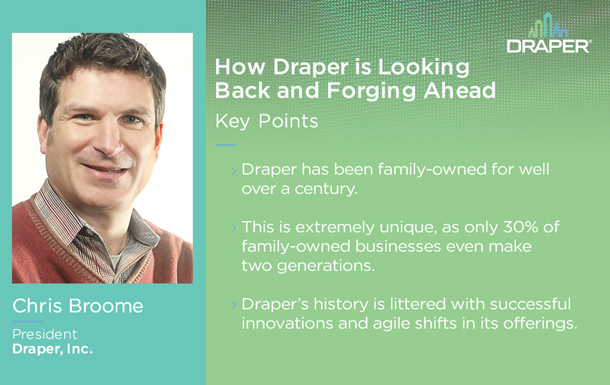 Very few family-owned companies make it past the second generation. It is possible, however, for a family business to not only survive but thrive. And Draper is living proof of that fact.

On this episode of Engineering Value, a Draper podcast, host Tyler Kern talked with Chris Broome, the fifth-generation President of the company.

“I always knew Draper was unique, being around for 118 years and still being in the family, so I did some research,” Broome said. “One of the things I found out is only 30% of family-owned businesses make it to the second generation and, from there, only 13% make it to the third and 3% to the fourth. “It must be very unusual for a company to get to the fifth generation.”

The company was founded by Broome’s great-great-grandfather, Luther Draper, to manufacture window shades for schools. But over 118 years the business has grown and expanded into other areas, including projection screens, gym equipment, and tailored solar control solutions and AV mounts and structures.

And while the percentages of family-owned business surviving even to the second generation don’t look very promising, that tradition of living on the cutting edge continues today and remains a driving factor behind Draper’s success.

Another factor is the family-owned nature of Draper, and a company culture that focuses on customer care balanced with employee needs, which over the years has resonated with the local community.

Broome joined Draper in 1992 and became company president earlier this year. While he is proud to hold the position, he doesn’t plan to relax now that he’s in charge.

“I think we have a very exciting future,” he said, “and we’ll be able to take advantage of that by doing the things we’ve always done, which is embracing change and looking for new opportunities”.

You can hear the full podcast episode here. You can also find it on iTunes, Google Play, Spotify, and Stitcher.