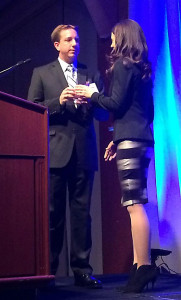 Each year the editors of PLANSPONSOR magazine recognize employers who demonstrate leadership in providing exemplary 401(K) plans for their employees. PLANSPONSOR is distributed nationwide to all employers who sponsor 401(K) plans. Draper was named the winner in the Corporate 401(K) category for plans with less than $50,000,000 in assets.

We were nominated for this honor by ProCourse Fiduciary Advisors, our plan consultant.

Google was the winner in the category for plans with more than $1 billion in assets, and Microsoft was a finalist. Previous winners have included IBM, General Motors and the Mayo Clinic.

Congratulations and thanks to Danny and the members of Draper’s 401(K) Committee on a job well done!