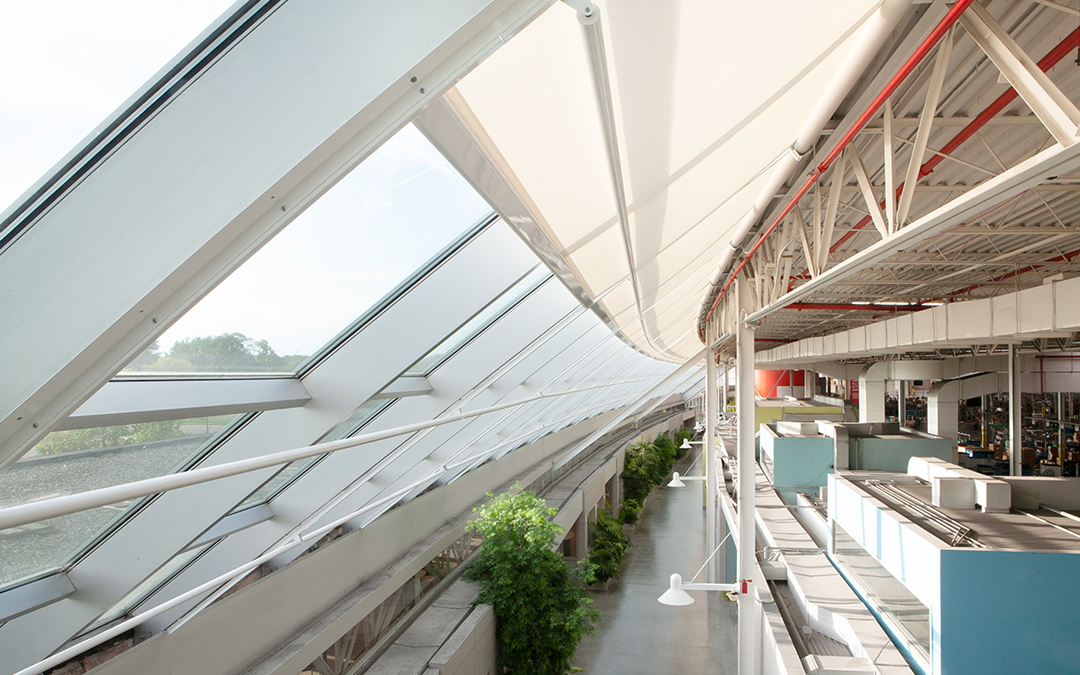 American furniture manufacturer Herman Miller, Inc., had a solar control problem at their manufacturing facility in Holland, Michigan, known as the “Greenhouse Factory.” And, as one of the first companies to produce modern furniture that includes many pieces considered icons of industrial design, just any solution wouldn’t do.

Unfortunately, the original shading system wasn’t up to the task and hadn’t been used for several years due to safety concerns. The shades had been disconnected and secured over worries that the 12’ wide x 18’ high shades might fall.

“Their current shading system was not operating and they definitely needed a new option for sun control because the skylights are southern facing,” said Savanna Weih, district sales manager for Triangle Window Fashions. “We needed to supply a fully-functional and safe solution that would enable them to operate these large shades and take advantage of the natural daylighting element that was designed into the building by the architect.”

Triangle approached Draper’s solar control solutions department with the problem. Due to the significant slope of the skylights, the SCS engineering team designed a custom wheeled hem bar with side tracks to guide the hem bars along the curtainwall slope. Intermediate rollers were added to support the fabric and minimize sag across the large units.

Because of safety concerns created by the original installation, Draper designed custom brackets that will capture the rollers in the event of an unforeseen mechanical failure.

“That was really more to give Herman Miller peace of mind—and alleviate the concerns they had,” said Scott Cash, a solar control solutions sales consultant. “We were fully confident in our engineering team’s ability to design a safe solution.”

To further alleviate any concerns, the Draper design team accompanied Triangle Window Fashions to meet with Herman Miller and present the custom design.

“They were very pleased with our design and relieved to learn they would be able to finally use their shading system,” Cash said. “They agreed to move forward with the installation.”

Draper next assembled a full-scale mock up in our SCS production area, to ensure that all bases had been covered. And if Herman Miller’s reaction is any indication, they were.

“Everyone was very impressed with the application and design,” said Weih. “Their performance on jobs like this is one the main reasons Draper is our choice vendor.”