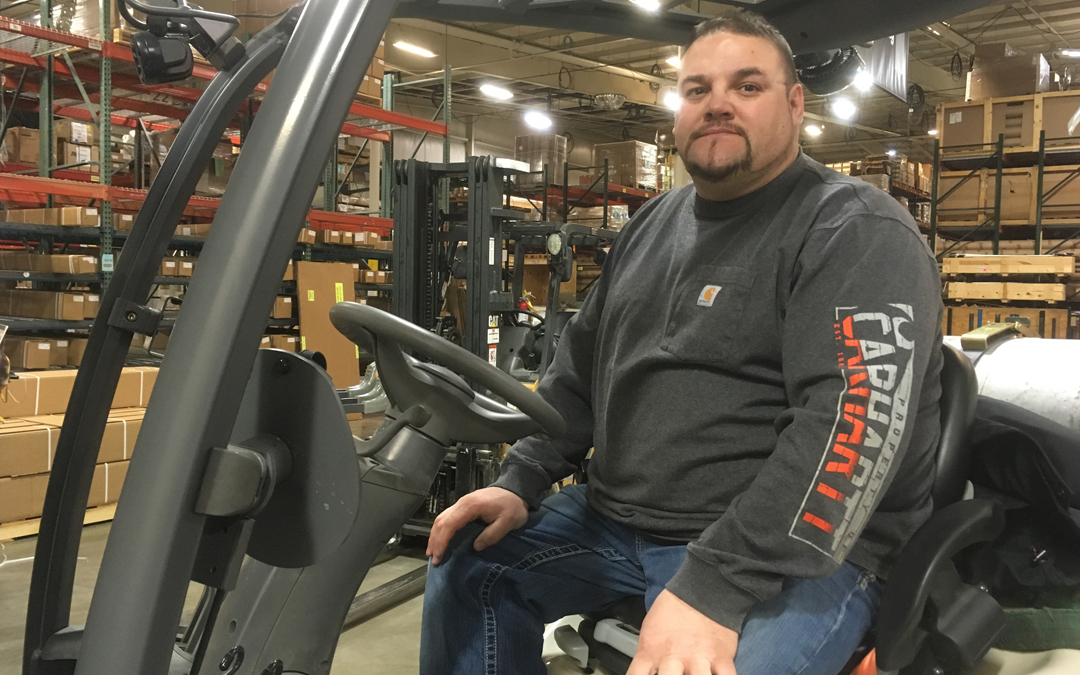 On January 11, Calvin Parham was running a little behind schedule. The long-time Draper employee was destined to be even later than he had imagined.

On the way out of his Ogden, Indiana, home, Calvin smelled smoke coming from the direction of his elderly neighbor’s house. Instead of shaking it off and hurrying on to work, Calvin investigated, and wound up becoming a local hero as he rescued his neighbor.

Below is an article from the February 3, 2019, New Castle Courier-Times covering a celebration of Calvin’s efforts. It appears here with the permission of Darrel Radford of the Courier-Times.

Congratulations and well done to Calvin and to the many volunteer firefighters and EMTs who are employed at Draper. Thank you all for your sacrifice.

Calvin Parham walked into the Dunreith Community Building Sunday afternoon to the surprising sound of applause and people shouting “congratulations.”

It wasn’t his birthday. He wasn’t celebrating an anniversary. Parham was the man of the hour because of what had happened early Friday morning, Jan. 11—and how his actions turned a potential tragedy into a neighborly triumph.

A crowd of more than 30 people were there to thank Parham for heroism during an Ogden house fire that in all probability saved the life of his longtime next-door neighbor, 85-year-old Ed Norfleet.

“lf it wasn’t for Calvin, we’d probably be having a funeral,” Spiceland Fire Chief Scott Teague, [a Draper employee,] said. “Most civilians won’t put their lives at risk and do this.”

As a colorful cake with the words “Calvin, Local Hero,” waited to be cut behind him, Parham said the true heroes and heroines were those who serve on Knightstown, Dunreith, and Spiceland volunteer fire departments.

“You guys are the real heroes,” Parham said. “You do all the hard work. Going into that smoky house gave me a new perspective on what you gentlemen do. I was just lucky enough to be in the right place at the right time.”

It was approximately 6:23 a.m. Friday, January 11, and Parham was just leaving for work. He usually was on his way by now but on this day Parham was running behind schedule. Some might call that a coincidence. Others would say it was a “God-incidence.”

Whatever the case, Parham said his nose made him stop and look.

“I smelled the smoke and over by Ed’s house, there was a light,” Parham said. “It wasn’t a fire at that time, but just a glowing and it caught my attention as I was leaving to go to work. I went from standing outside to going inside yelling for Ed. I don’t remember making the 911 a call but obviously I did.”

Parham found the neighbor he’s known for decades and helped get him out of the house. He had to carry him part of the way. Ed had been sick and bedridden over the past few days before the fire.

Instinct took over for Parham, who said he didn’t remember much about getting Ed out of the house.

“I don’t remember even seeing flames but I can tell you, the smoke was terrible and the heat was bearing down on us.”

Carrying Ed was a labor of neighborly love.

“I’ve known Ed my entire life, ever since I was a little kid,” Parham said. “He’s been a good neighbor to me. When I was younger, Ed was the guy in town who went around and plowed everybody’s gardens. And when I was a kid, everybody in town had a garden. He was always that guy who had a tractor and volunteered his time to help others.”

Parham’s actions came just in the nick of time.

Knightstown Fire Chief Eric McDaniel, [also a Draper employee,] remembers the anxious feelings in the pit of his stomach as he responded to the scene.

“When we pulled out of the fire station and onto U.S. 40, we could see the flames, so we knew we were responding to a bad one,” McDaniel said. “We weren’t sure if somebody was trapped or not, but when we arrived, we knew if someone was inside, their chances of survival were next to none.”

The Spiceland and Dunreith Fire Departments arrived soon after.

“The front of the house was pretty much gone when we got there,” Teague said. “You could see the fire from Spiceland Pike and Road 800 South.”

Crews were on the scene for more than four hours.

The severity of the fire made Parham’s actions even more heroic in the eyes of firemen on the scene.

“I’ve been on the Spiceland Fire Department for 30 years and it’s the first time we’ve ever had something like this,” Teague said. “Most people won’t risk their own lives to save another.”

“It’s awesome for him to have the bravery to go in and do that,” McDaniel said. “To be able to remain calm enough in that situation is remarkable. Even though his adrenalin was going, he was able to function and be focused enough to do what needed to be done. A lot of people aren’t.”

“He was just in the right place at the right time because he was actually supposed to have gone to work earlier. It was meant for him to be there,” Pat said.