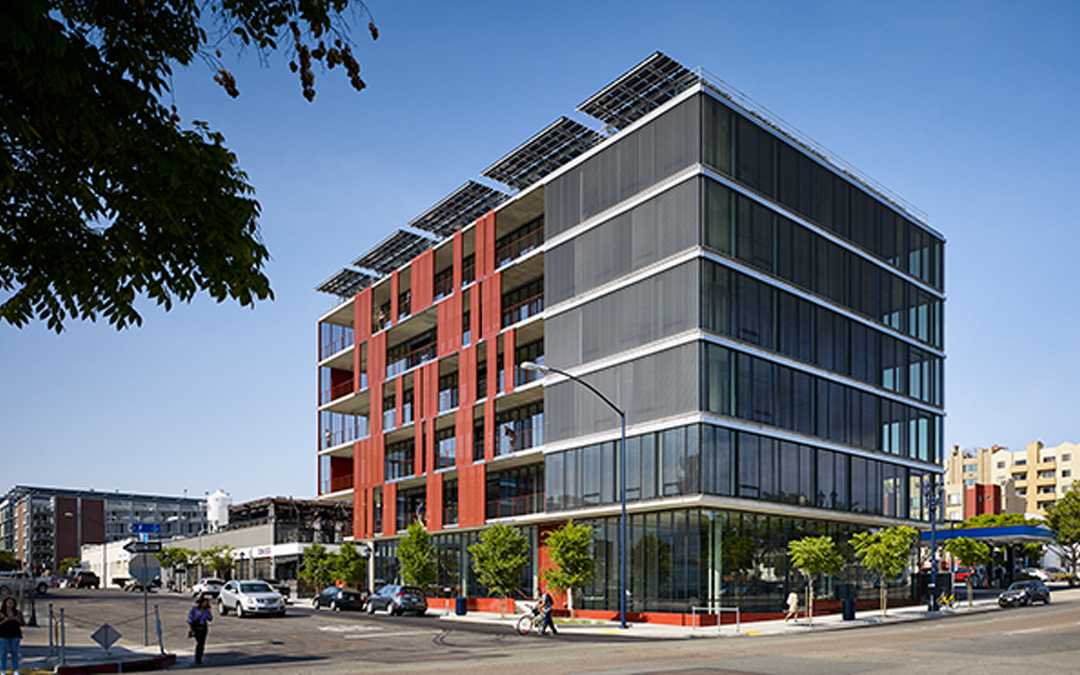 Interior and exterior shading systems both have roles to play in handling glare and solar heat gain issues. While interior solutions, such as roller shades, are best known in North America, often an exterior solution is a better option.

So how do you know when to use an exterior shading system? Here are four questions for understanding the benefits of exterior solutions:

1. Why is an exterior system more effective than an interior one?
Energy from the sun is short wave and carries little heat. Heat is only produced when the solar energy is absorbed by a surface (carpeting, furniture, clothing) and is then radiated as long wave infrared (IR) energy.

An interior shading system can transmit, absorb, or reflect solar energy back through the glazing, depending on factors such as openness and color.

An exterior system can also transmit, absorb, or reflect solar energy, but anything absorbed by the shading system is radiated as heat on the building’s exterior. Glass is not transparent to long wave energy and, as a result, little of this radiated heat gets inside the building. By eliminating one of the two sources of heat gain, solar gain inside the building is greatly reduced.

2. What are the main benefits of an exterior system?
Shading systems reduce the amount of solar gain in the building, which allows the size of the HVAC system to be reduced. The resulting savings in capital cost can wholly or partly offset the shading system’s cost.

Some buildings need to be cooled in the summer and heated during the winter months. If a retractable exterior shading system is used, it can be turned off in the winter months, allowing the solar gain into the building to supplement mechanical heating.

Exterior shade systems can also reduce the need for artificial lighting by optimizing diffused daylight to illuminate interiors. More than 30 percent of the energy costs of an office building relate to artificial lighting, so if lighting needs can be reduced, significant savings can result.

A good shading system manages both heat and glare while providing access to outside views. More comfortable working conditions can lead to increased productivity.

3. What are the most common attachment methods?
Installation of an exterior shading system may involve attaching directly to the curtain wall mullions, to brick or concrete masonry units (CMUs), or through cladding to steel structure. Different brackets will probably be required for each situation and will be developed to meet specific project requirements.

Exterior roller shades and venetian blinds are installed just above or at the top of the glazing. They are relatively lightweight and, because they are retracted during high winds, they do not apply significant loads to the facade, so lighter aluminum brackets can be used.

Exterior louver and brise-soleil systems remain fixed in place, so they apply more significant loads to the facade. Brackets, bolts, and other fasteners will be in accordance with the loads defined in local building codes. If the systems are being connected to the curtain wall, it is possible the mullions will need to be reinforced with steel. Structural calculations will always be undertaken to determine the applied loads and the impact on the facade design and building connections.

Other issues that need to be considered include separation of dissimilar metals, cold bridging, and water penetration, as well as relative expansion and contraction between the shading system and the facade.

4. How do exterior systems cope with adverse weather conditions?
Fixed louver systems are designed to take account of maximum applied loads. With brise-soleil systems, the loads at the attachment points might be significant, particularly if they project very far out from the building. If this is the case, diagonal brace rods might be incorporated into the design to allow the load to be shared between two attachment points. With fixed systems, ice buildup and the risk of falling ice must also be considered. Therefore, brise-soleil systems might be inappropriate for tall buildings in urban areas.

Ice is a potential issue, but should not be a problem if systems are protected in the raised position. Automated controls will ensure the systems are only deployed when there is sun. Temperature and humidity sensors can also be used to stop the blinds or shades from being operated when there is a risk of icing.

For a more in-depth exploration of exterior shading solutions, click here for a free white paper on the subject.