A Structure for Success at InfoComm 2019 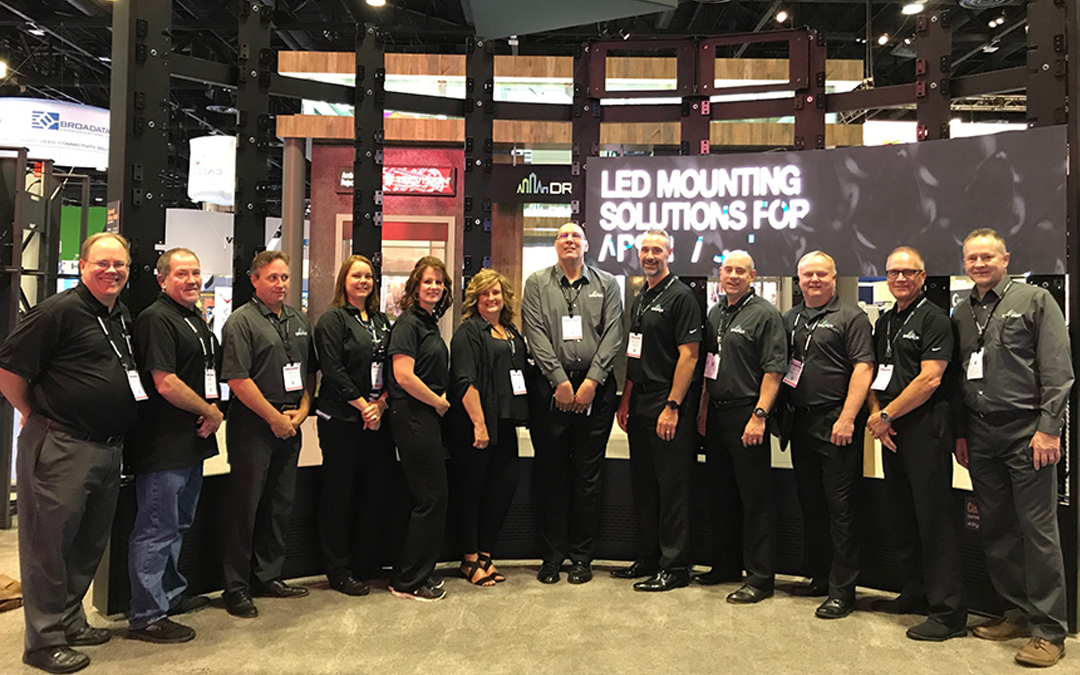 It was a pivotal show in the Draper® journey. In addition to experiencing heavy booth traffic, the show took on greater strategic significance for us. We worked closely with several manufacturing partners to prepare for the show. Our structures supported the work of companies like Absen, Barco®, Leyard® Planar, and Sony, while our TecVision ALR projection screens were seen in the NEC and Canon exhibits.

Our partnerships are stronger than ever and we’re looking forward to sharing some cool projects that are taking shape in the near future.

“The push toward higher and higher brightness for virtually all ambient-lit commercial, house of worship, and education environments brings with it increased demands on a projector’s cooling system, which leads to—you guessed it—more fan noise.” That quote is from the projectorcentral.com Best of Show award announcement for our Silent Partner projector enclosure. “By cleverly combining acoustic isolation foam, a noise-killing winding airflow for exhaust, and a thermostatically controlled fan, the Silent Partner reduces projector noise by 20-25 decibels.”

AVIXA, the organization behind the InfoComm show, depends on volunteers for much of its work. Draper’s marketing director, Penny Sitler, was recognized at the InfoComm VIP breakfast for her three years’ service as chair of the AVIXA Women’s Council. Her term ended in January 2019, and during that time the council grew dramatically.

“We couldn’t be more excited about the opportunities that are possible in our new partnership with Draper,” said Franklin Moore, President of AV Franklin. “I have known Jim Hoodlebrink, director of audio-visual distribution for Draper, for many years now and I am confident that with the depth of his experience and industry knowledge we can once again change the landscape of the marketplace.”

AV Franklin is a distributor of high-quality audio-visual products primarily serving the rental and staging industry.

A step up.
LED was everywhere at InfoComm this year and there more interest in the structures and mounts that support displays. While Draper has been increasing our presence in the structures market, this year’s show marked a big step up for us in market recognition. There was more interest than ever in Draper solutions and display manufacturing partners sent lots of people our way.

We took a different approach to demonstrating our structures this year. We showed only partial video walls, leaving much of the supporting structures open for easy visual access. This provides a better understanding of what we are doing and how our products go together.

Once again Draper subsidiary Evoko shared some space with us. Evoko’s motto is “meetings made magnificent,” and their innovative and elegant solutions got a lot of attention.

Never mind 4K—try a 5K.
As if three full days wasn’t enough time on their feet, 500 InfoComm 2019 attendees participated in the AVIXA™ Foundation’s inaugural 5K Walk/Run on Friday, the final day of the show. Proceeds from the 5K go to efforts to attract and develop students for AV careers.

Draper international regional sales manager Nate LaMar was among those participating. He was joined by five runners from Draper subsidiary Evoko:

Taking you there.
If you weren’t able to get to the Draper InfoComm booth, you can still see our solutions in action. Below are several links to videos shot during the show: