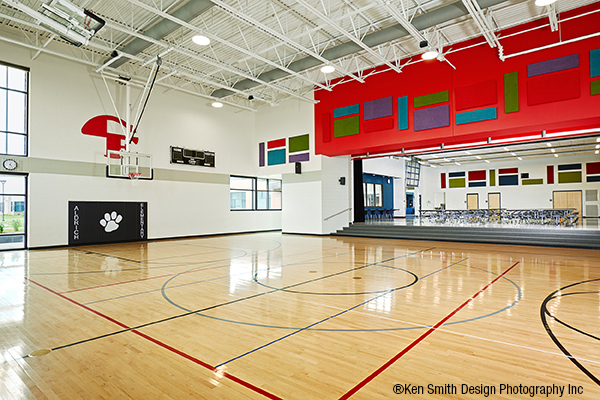 Even in the competitive higher education market much can be gained by learning from each other. That’s the main idea behind the annual American School & University Architectural Portfolio issue.

“As the first, largest, and most prestigious education facilities awards competition, it is the ultimate resource to find examples of learning spaces that you can glean ideas from for your next construction project,” said Joe Agron, content director and associate publisher of American School & University, writing about the 2019 edition. “With more than 100 projects featured, this year’s competition exhibits some of the best in education facilities planning, design, and construction.”

As usual, Draper gymnasium equipment was featured in some very nice projects.

Draper provided basketball backstops and volleyball systems for the gymnasium, which is separated from the cafeteria by a moveable wall, allowing a high level of flexibility.

Nitschmann Middle School, Bethlehem, Pennsylvania
This new facility sports not one, but two gymnasiums. TF-20, TB-25, and wall mounted backstops, gym divider, and EZ Pad controls help get the most out of the gym spaces.

The four-story building was constructed on the same site as the old school, keeping it in the center of its West Bethlehem neighborhood. Classrooms are centered in the facility, with an auditorium and cafeteria on one end and the two gyms on the other end. The school’s illuminated clock tower is a civic landmark for the community.

The three-story design is built into a bluff and makes use of natural daylighting and views while blending in the site’s topography.

The state-of-the-art gymnasium is also designed for the 21st century. EZ Pad controls make deploying TF-20J and TBS-26B backstops and the gym divider a snap, and it also gets rid of them quickly so the Elite Volleyball Systems and badminton systems can be put into use. Draper supplied wall pads as well.

Solon Intermediate School, Solon, Iowa
An expanding student population created the need for this Intermediate School for fourth and fifth grades. The two-story structure features a “streetscape” theme, with classrooms on one side and shared spaces on the other side. This space is about flexibility and sharing spaces. The gym doubles as a cafeteria and multipurpose room. Draper TF-20-B backstops, PVS-01 volleyball systems, volleyball transporter, judges stand, and chinning bar are perfect solutions for allowing gym equipment to melt into the background during other uses.

Shakopee High School, Shakopee, Minnesota
With 3,200 students, the Shakopee High School addition and renovation project doubled the school’s capacity. The gymnasium reflects a large student body with diverse interests and needs. Draper provided 36 TF-20S-B backstops and TBS-26B backstops, wall pads, mat lifters, and practice cages, plus gym dividers to get as much simultaneous use of the space as possible.

To make the renovation work, designers had to utilize existing spaces and add to all sides of the building.

To see these and other examples of excellence in higher education design, click here.