This One Belongs to the Reds 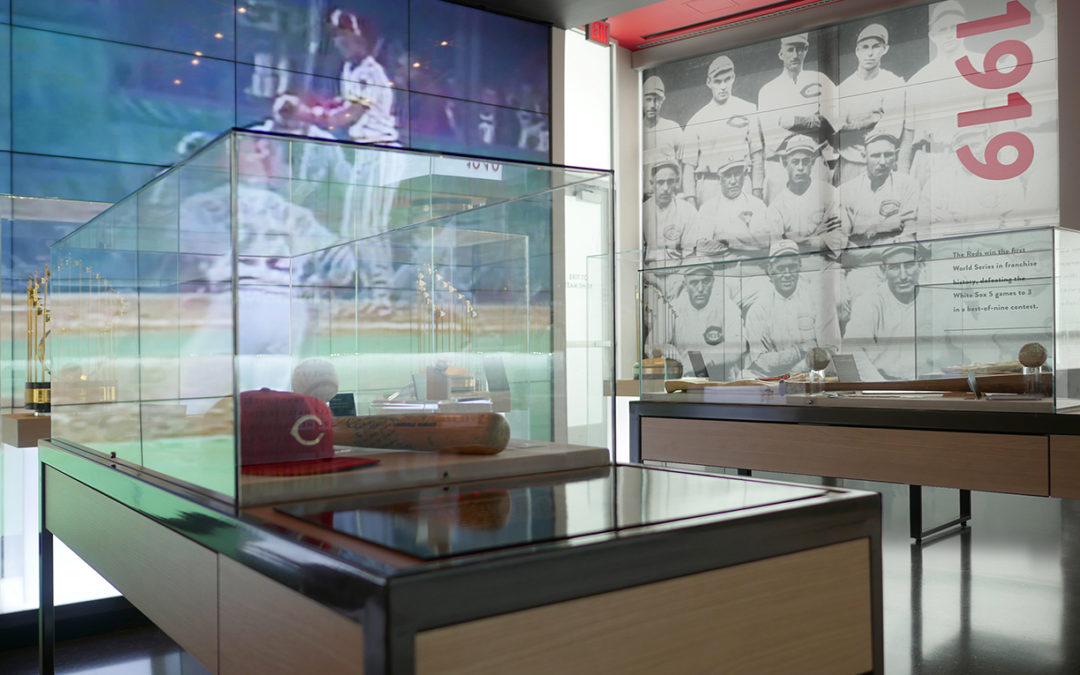 Since the Cincinnati Redstockings became the first professional baseball team in 1869, the franchise has enjoyed a rich history. Players like Joe Morgan, Johnny Bench, Barry Larkin, Frank Robinson, and Pete Rose have helped the Reds to 9 National League pennants and 5 World Series titles.

When the time came to remodel the Cincinnati Reds Hall of Fame Museum, nothing but the best would do for the 16,000 square foot facility.

“In terms of sports museums, we are the largest in all of baseball,” said Chris Eckes, curator of the Cincinnati Reds Hall of Fame Museum. “Our hall of fame itself dates back to 1958, so we are one of the oldest continually operating halls of fame in all of sports. We’re a cut or two above all the rest.”

The goal of the 2019 renovation, which coincided with the 150th anniversary of the team’s founding, is a complete immersion in Reds’ history. It begins with that original 1869 team and tells the Reds’ story through the present day.

That is accomplished in multiple ways. A linear storytelling experience includes baseball cards, graphics, memorabilia, a plaque room with a 360-degree theater, and the Williams Family Champions Gallery.

The gallery is the “crescendo” at the end of the tour. It uses memorabilia, World Series trophies, and video walls to tell the stories behind the trophies.

“We had to be very cautious of the amount of memorabilia that was in here, controlling some of the light and air conditioning and being able to compress some of those moments of story to go light and dark and also open up the space when we needed to,” said Aaron Ruef, account director, FRCH Nelson, a branded environments firm that works with the Reds and designed the new hall of fame space. “We’re often challenged with space like this where we really want to control light, but we also want to tell a story.”

Something that could have been a hindrance to seamlessly telling the story was the existence of some large windows in the Williams gallery. Instead, the windows became an opportunity to continue the story using Digitally Printed FlexShade® roller shades.

“I think the opportunity to create almost these lightboxes in the space that tell a really deeper story … gives you an opportunity to celebrate those in addition to the memorabilia,” said Ruef. “It creates this holistic 360-degree moment of honoring what came before. Of championship. And of what will hopefully come in the future.”

FRCH Nelson worked with Standard Textile on the printed shades.

“Graphic shades are kind of a unique request. The process we go through isn’t as simple as a typical shade,” said Troy Spratt, project manager, Standard Textile. “The biggest challenge we faced on the project was the construction schedule and the accelerated timeline.”

“We work with them very closely. They brought this project to Draper, and we had a very tight timeline as far as installation to get the job done,” said Chad Tabor, assistant shade sales manager. “They knew that Draper could not only provide the product that was needed, but also do the graphic shades on the job that the Cincinnati Reds wanted.”

“Lighting and the control of the environment is critical to the success of an experience. The idea of having a product that gives you as much flexibility as what’s here and what can be delivered from density of material to ability to print, the ability to raise and lower in different ways, I think this gives us a lot of walking around room to do some really creative things with spaces that can be very limiting,” said Ruef. ”I think the idea of products like this that are as flexible as they are give us the ability to transcend some of the spaces we inherit.”

The end result is very different from its predecessor, but it’s a 21st century platform that the Reds can build on for many years to come.

“We do a lot of jobs on a daily basis, and sometimes it’s just on a piece of paper. You don’t always see the finished product, said Tabor. “By walking in here, to actually see our graphics, that I know we did in our factory, it’s pretty neat to see the fruit of your labor.”

You can tour the Reds Hall of Fame for yourself—without leaving your home. Click here for a video about the project.